Convicted for ‘advertising’ abortion, German doctors are fighting to share the facts

(CNN)Dr. Detlef Merchel didn’t expect to end up in court for doing what he sees as part of his job: giving his patients information about the medical procedures he provides. But there he was, getting convicted for “advertising abortion” — a crime in Germany.

He received a fine of €3,000 ($3,650) last month for sharing details about the type of abortion he offers, as well as the legal requirements for accessing it on his website.
Merchel’s conviction, and the prosecution of several other doctors for the same offense, has sparked protests in Germany and renewed the debate over the country’s approach to terminations.
Abortions are regulated by Germany’s criminal code. They are permitted up to 12 weeks of pregnancy, but people seeking the procedure must attend a compulsory counseling session, which is followed by a mandatory three-day waiting period. After 12 weeks, terminations are only allowed under some exceptions, such as if the pregnancy or birth poses a risk to the mother’s physical or mental health.
But the law doesn’t just regulate the procedure itself. It also restricts abortion providers from publicly sharing any information about it. Until 2019, the law prohibited doctors from even disclosing the fact that they perform abortions. Now they can say that, but once they do, they are forbidden from sharing anything else.
“I can only say one sentence: ‘I do termination of pregnancy if [the patient] follows the law,’ but I mustn’t say anything more,” Merchel told CNN.
Another doctor who has also been convicted for having information on abortion on her website said she is concerned about patients not being able to find the facts they need they need to make an informed decision.
“The specialists — the doctors — had to remove their information, which means that now it’s mostly just the anti-abortion sites that can be found on the internet,” Dr. Kristina Haenel told CNN in an email. “I want to be able to inform my patients about the different methods, their advantages and disadvantages, possible complications and risks — as the [World Health Organization] recommends.”
Haenel was fined €6,000 ($7,320) in 2017 and has since embarked on a journey through the German court system with the ultimate goal of having the ban struck down. She has appealed the verdict and filed a complaint to Germany’s Federal Constitutional Court.
“I don’t think the [law] is compatible with our constitution,” she told CNN in an email. “Women today need to be able to access detailed and factual information — I can’t withhold information from you on a subject that affects your body and your health.” 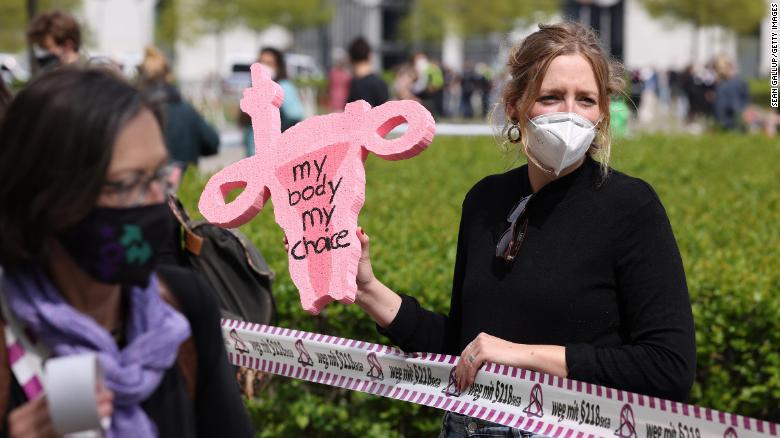 Abortion rights activists demand changes in Germany’s abortion law during a protest in front of the Reichstag in Berlin on May 15, 2021.
Other advocates say the way Germany regulates information about abortion is unique among Western democracies. Leah Hoctor, the Center for Reproductive Rights’ regional director for Europe, describes it as “highly problematic and extremely harmful.”
“The idea that a European country actually criminalizes the provision of medically accurate information on abortion, but doesn’t effectively regulate and clamp down on misleading inaccurate information is just nonsensical,” she said.
Hoctor added that the Center for Reproductive Rights believes the law contradicts not just World Health Organization guidelines, but also international human rights standards and Germany’s obligations under international treaties.
But anti-abortion activists see it differently. Alexandra Linder, the chairperson of the Federal Right to Life Association, said her organization opposes any changes to the legislation. She doesn’t agree with the idea that an abortion is a medical procedure, saying that “abortion is no health service.”
Lindner says there is no shortage of information in Germany, pointing to the fact that state-approved providers of the mandatory pre-abortion counseling also provide details about the procedure. “The only reason to offer abortion on the website of an abortion institution is to earn money by that,” she told CNN by email.

‘Someone needs to do it’

Merchel has been practicing as a gynecologist for 28 years. He is based in the small town of Nottuln, less than an hour’s drive from the Dutch border.
“I’m just a normal gynecologist, doing everything that a gynecologist in Germany does,” he said. “And I have been doing medical termination of pregnancy with tablets since it became possible in Germany about [13] years ago.”
Merchel’s website details all the different procedures and services he provides. After the law changed in 2019, he also added a line saying his practice provides abortions. And that’s when the problems started.
Someone alerted the authorities. Merchel was tried and convicted. He said he doesn’t intend to pay the fine, because he disagrees with the verdict. He is still discussing the next steps with his lawyer.
Germany has relatively low abortion rate of 5.9 abortions per 1,000 women aged 15 to 49, according to government data for 2020. By comparison, the US abortion rate stood at 11.3 abortions per 1,000 women aged 15 to 44 in 2018, according to the Centers for Disease Control and Prevention, while the UK government said 18 per 1,000 women had the procedure in the same age group in 2019.
Still, about 100,000 women opt for an abortion in Germany each year. Merchel and Haenel say it is vital to make sure they can access it safely.
“The problem is the law and the problem is also our system,” Merchel said. While abortion is permitted in Germany, access to it is also somewhat limited.
One reason is the fact that roughly a third of Germany’s hospitals are run by Christian charities and non-profits that do not provide abortions because of their beliefs. Doctors can cite conscientious objection against performing terminations. 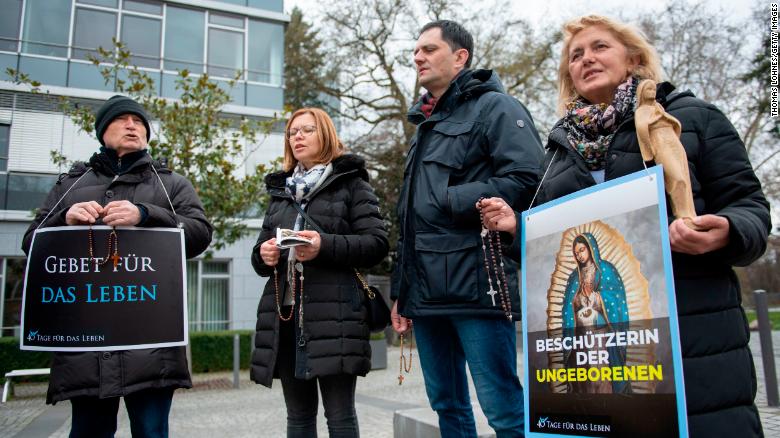 Anti-abortion activists pray during a “40 Days For Life” picket outside the Pro Familia center in Frankfurt, Germany, on March 26, 2019. The state-approved center offers consultations on abortions.
The stigma around abortion, Merchel says, means that even many medical professionals still hesitate to discuss it.
“Everybody knows that someone has to do it because it is needed, but they don’t want to talk about it,” he said, adding that the lack of information can be a particular problem when it causes unnecessary delay. “The woman should have all the information she needs on time, so that when she does it, it’s not week 11, but week seven when she has the termination, because as the time goes on it’s a more difficult procedure.”

On the day he was convicted, Merchel found crowds of supporters protesting against the law in front of the court. “I only had [a] positive reaction,” he said. “People saying: ‘You should go on, we will help you.’ Even older people, women who [have been my patients] for 25 years and never knew that I do termination of pregnancy. They all say that it’s okay. This is not the right law.”
Haenel, too, says she has received “a tremendous amount of support and encouragement” from patients, individuals and groups campaigning for the law to be changed. But she has also received multiple threats from those opposing abortions.
“They wish me dead and write me disgusting emails,” she said. Since she became one of the faces of Germany’s abortion rights movement, the abuse has increased.
She has been called “degenerate” and a “child killer” and, on one particular website, compared to Nazi henchmen in concentration camps.
Haenel took legal action against the site’s owner, an anti-abortion activist. The court ruled that comparing abortion to the Holocaust was not acceptable. But it also said that saying Haenel has “blood on her hands” falls within the right to free speech.
Germany’s Federal Constitutional Court is due to make a decision on Haenel’s case soon, ruling on whether the ban on providing abortion information is compatible with the country’s constitution.
She is hopeful. During an appeal in 2018, the judge convicting her told her she should “carry the judgment like an honorary title in the fight for a better law.”