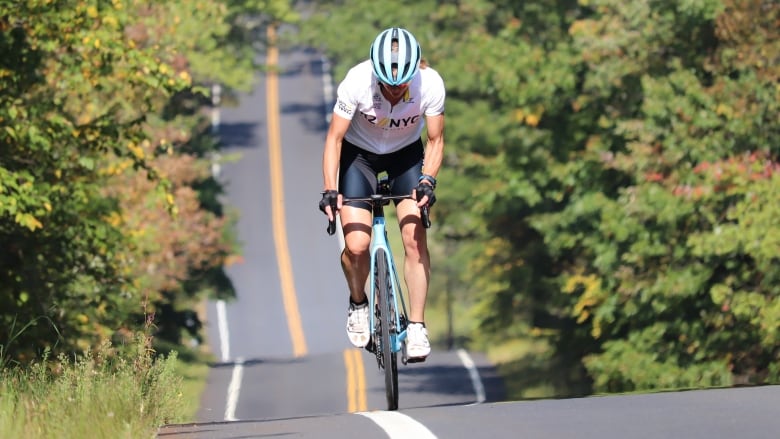 Suzanne Zelazo in the Adirondacks 2019. The former professional triathlete says getting into the zone takes hours of practicing, failing and then more practicing before entering a state of flow becomes possible. (Mike Strizic)

You’ve probably experienced it. And you’ve certainly heard of it: that state of being in the zone, in the groove, on a roll. It’s what researchers call ‘flow’: a state intimately familiar to athletes and artists — and to anyone who’s been fully absorbed in a given task to the point where time seems to stand still, and even the sense of self disappears.

The term “flow,” and the experience it describes, was first noted by psychologist Mihaly Csikszentmihalyi in his investigations of optimal experience in 1975. After conducting thousands of interviews with people following their passions, from artists to athletes to surgeons and chefs, he noted a similar refrain: they all described a feeling “of being carried by a river, carried by currents” as the sequence of events flowed from one to the other effortlessly.

Csikszentmihalyi discovered six core characteristics of the flow experience: complete concentration, a merger of action and awareness, a vanishing of self-consciousness, a supreme sense of control over one’s actions, an altered sense of time, and an experience of the activity as intrinsically rewarding.

Flow. Athletes know it: the state of mind and body when every move made is the right one. Flow can also occur in writing, or cooking, or parenting — and it can also be cultivated. 1:40

Risk as a forerunner to flow

In studying the accelerated advancements in extreme and adventure sports, Kotler discovered that these athletes were pushing beyond what was thought possible by raising the stakes and riding the risks.

“Feats that were, three months earlier, considered absolutely impossible — never been done, never gonna be done — were not just being done, they were being iterated upon,” he writes.

Surrendering to risk (and it doesn’t have to be physical) is an essential precursor to flow. The formula for doing so is the basis of Kotler’s latest book, The Art of Impossible: A Peak Performance Primer.

Early on, Csikszentmihalyi discovered that finding flow is so compelling that people pursue it for its own sake.

While any extrinsic motivation, like a cheering crowd or a big prize can create a positive feedback loop, it’s not what drives the flow experience. Flow hinges on reaching for just the right amount of impossible — what he calls the “challenge-skill balance.”

I had a disconnect between how my body felt and what the timekeeper was telling me I should feel. I stopped thinking about it, and just put my head down and ran.– Alex Hutchinson, former national-team long-distance runner

While flow is available to all of us, certain people do seem to experience it more often than others.

Why flow is common among athletes and artists

Embodiment — or a physical engagement with the concept of flow — helps, partly because rich sensory stimulation activates flow. But  also because it forces focus and as Kotler says, “flow follows focus.”

Athletes and artists rely on their ability to be completely absorbed in the task at hand. Olympic modern pentathlete Donna Vakalis competed at the 2016 Olympics in Rio de Janeiro, where she found herself flowing effortlessly through her fencing bout—her self-described weakest discipline.

“Every millisecond was going by really slowly… And there’s a lot of different sounds happening,” she said.
“But all of that is kind of just blurred out the way a background in a photo is blurred out sometimes. And the only thing that’s sharply in focus is my goal of trying to hit this person in front of me.”

And hit she did — moving her into fourth place, higher than she’d ever placed before.

Montreal-based composer and pianist Jean-Michel Blais describes the flow experience as being present in his body and yet simultaneously outside of it.

“There’s this very blurry line between the conscious moment and the flow moment,” he said. “I’m somehow slightly detached from my body. It’s hard to put into words. Maybe because it doesn’t belong to the realm of language. It’s an altered state.”

Happiness in the zone

Science writer and former Canadian national team runner Alex Hutchinson understands firsthand what it means to enter a state of flow. He spent years trying to break the four-minute barrier in the 1500 metres.

He finally did so in 1996 when the time-keeper in a race called out the wrong times, making Hutchison think he was running faster than he’d thought possible.

“I had a disconnect between how my body felt and what the timekeeper was telling me I should feel. I stopped thinking about it, and just put my head down and ran,” he said.

In the next few races, Hutchison would drop an astonishing 17 seconds and qualify for the Olympic trials.

While the experience of flow is subjective, the biology of flow is real. Kotler and others have outlined the neurochemistry of flow which includes the feel-good, performance-enhancing combination of neurotransmitters: norepinephrine, dopamine, anandamide, and serotonin, which collectively enhance problem solving, reaction time, attention, pattern recognition and creative or lateral thinking.

The potency of flow underscores something Olympic athletes and high performance theorists and thinkers know well: harnessing  a state of flow is crucial for creating happiness and a more fulfilled and productive version of ourselves.

There needs to be freedom to take risks. ​​​​​But you cannot be creative if there are no rules to break.– psychologist Rustin Wolfe

Csikszentmihalyi dedicated his career to pursuing flow because, he says, he “became interested in understanding what contributed to a life worth living.”

And if the transformative quality of flow sounds mystical or spiritual, that’s because it does share aspects with the transcendental—what Nietzsche and Goethe referred to as Rausch, a term that has been translated as “ecstasy,” “intoxication,” and “flow.”

While a flow state fosters a sense of ease, getting into flow is anything but easy. Those moments of mastery depend on an enormous amount of time and discipline spent doing the work required, and even failing regularly.

“There needs to be freedom to take risks,” explained psychologist Rustin Wolfe at St. Mary’s University of Minnesota. “But you cannot be creative if there are no rules to break. It has to start with some structure — and Csikszentmihalyi recognized that early on.”

Flow is inextricable from the effort that precedes it. Knowing the rules is crucial to the risk involved in breaking them. And finding flow is a grind before it’s not. It’s a commitment to a process — to the path itself. It’s key to getting out from under the ego, to putting the work in, to allowing yourself to fail — until you succeed.

Guests in this episode:

Mihaly Csikszentmihalyi is a psychologist who coined the term “Flow” in 1975. He is the leading researcher on positive psychology and the founder of flow studies. Formerly the chair of the University of Chicago’s Department of Psychology, he is Professor Emeritus at Claremont Graduate University.

Jean-Michel Blais is a composer and post-classical pianist. His second solo album, Dans Ma Main, was short-listed for the Polaris Prize in 2018 and his score for Xavier Dolan’s film Matthias & Maxime won the Cannes Soundtrack Award in 2019.

Steven Kotler is a New York Times bestselling author, award-winning journalist and the cofounder/director of research for the Flow Genome Project. His most recent book, The Art of Impossible (2021) is a playbook for high performance with flow at its core.

Donna Vakalis is a Canadian Olympic modern pentathlete and PhD in Green Buildings Engineering. She is a sustainable living consultant.

Rustin Wolfe is a psychologist and professor at St. Mary’s University in Minnesota where he teaches creativity and flow. Wolfe did his graduate work with Mihaly Csikszentmihalyi.

Special thanks to Jean-Michel Blais whose improvised piano playing, recorded during his interview for IDEAS, was heard in this program.

* This episode was prepared and presented by writer and former professional triathlete, Suzanne Zelazo. It was produced by Greg Kelly.

Is now the best time for a promotion? A therapist says here’s how to tell if it’s a good (or bad) idea

Sheer Willpower Isn’t the Problem—Entitlement Is