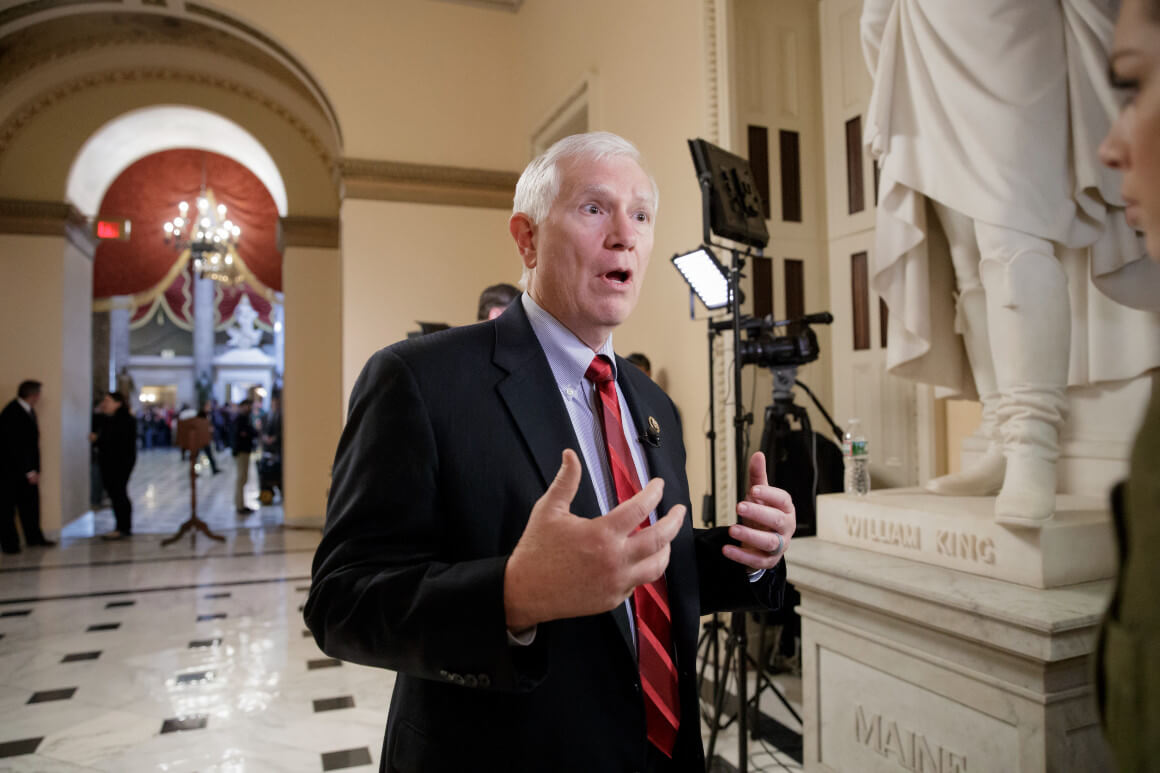 Rep. Mo Brooks, R-Ala. is interviewed on Capitol Hill March 22, 2017. Brooks stands accused of fomenting violence against the Capitol, which would be contrary to his duties as a lawmaker. | AP Photo/J. Scott Applewhite, File

The Alabama Republican is one of several defendants in the suit filed by Rep. Eric Swalwell, who says Brooks knowingly incited a mob of Trump supporters.

The Justice Department and the House of Representatives declined on Tuesday to represent Rep. Mo Brooks in a lawsuit that accuses him of helping to incite the deadly riot at the Capitol on Jan. 6.

The Alabama Republican is one of several defendants in the suit filed by Rep. Eric Swalwell (D-Calif.), who says Brooks knowingly incited a mob of then-President Donald Trump’s supporters to storm the Capitol, using incendiary rhetoric at a rally near the White House before the violent assault began. Trump himself, as well as Donald Trump Jr. and Rudy Giuliani, are named as defendants in the lawsuit.

In a 42-page court filing last month, Brooks sought to dismiss the case against him, arguing that his remarks were within the scope of his duties as a House member. The Justice Department and the House have typically intervened to defend lawmakers sued for their official actions, and Brooks sought similar treatment against his colleague’s suit.

Brooks cited the Westfall Act, which Trump himself had previously invoked during his presidency, with the Justice Department’s support, to obtain federal representation against a defamation lawsuit by New York writer E. Jean Carroll. The Biden administration has maintained that position.

But in Brooks’ case, the Justice Department rejected the notion that he was acting in his official capacity, noting that his remarks at Trump’s rally were almost entirely political.

“The record indicates that the January 6 rally was an electioneering or campaign activity that Brooks would ordinarily be presumed to have undertaken in an unofficial capacity,” Justice Department civil attorneys said in a 29-page filing late Tuesday.

Also, Brooks stands accused of fomenting violence against the Capitol, which would be contrary to his duties as a lawmaker.

Earlier in the day, House counsel Doug Letter offered a similar rejection, noting that the House rarely intervenes in legal disputes between individual lawmakers, particularly when they’re not related to official House business. In his filing, Letter appended a letter from Rep. Zoe Lofgren (D-Calif.), the chair of the House Administration Committee, urging the Justice Department to reject Brooks’ request for legal representation, as well.

The double-whiff from Brooks came on a day in which emotions surrounding the Jan. 6 attack were already running high. Four hours of riveting testimony from police officers wounded during the assault — they demanded accountability for lawmakers and Trump allies who they said bear responsibility for the violence — returned the issue to the forefront of the agenda in Washington. Trump himself delivered another public statement falsely claiming a left-wing role in the riots and reiterated his discredited claims that the 2020 election was stolen from him.

In his court filing, Brooks had argued that since his constituents largely supported Trump, speaking at a Trump rally could be construed as “official” business.

“But Brooks’s logic goes too far,” the Justice Department said. “Under his view, it is not clear what limit there would be to his legislative functions; so long as he could point to some desire on some part of his constituency, any purely electioneering or campaign activity would fall within the scope of his office or employment and require the United States to bear responsibility for any alleged tortious conduct.”

Department attorneys also said that if the allegations in Swalwell’s suit are true — that Brooks conspired with and instigated rioters to attack the Capitol — it would be so contrary to his official obligations that he could not have been acting as a lawmaker in doing so.

Department lawyers did not endorse Swalwell’s claims or offer an opinion on whether Brooks’ remarks alone could amount to what the law would view as instigation. Despite hundreds of arrests of participants in the Jan. 6 riot, there has been little public indication that federal investigators are pursuing potential links between those rioters and members of Congress, their staffs or Trump and his allies.

Trump’s lawyers have moved to dismiss Swalwell’s case against him but have not filed any motions seeking to have the U.S. government take over his defense. His attorneys have declined to explain their rationale.

Last month, the Justice Department angered some liberals and created tension with the White House by standing by a Trump administration decision to defend him against the suit filed by Carroll, who claims Trump raped her in a department store dressing room several decades ago. Carroll included the accusation in a 2019 book, and Trump criticized Carroll when asked about her in a subsequent interview. Trump’s comments prompted Carroll to file suit.

Lawyers for both administrations concluded that the statements Trump issued denying her claims were prompted by questions posed to him as a result of his office as president.

However, substituting the U.S. government for a party in a civil suit can have much broader implications than just who pays the legal bills. In many cases, such a substitution can end the suit because the move brings into play legal doctrines like sovereign immunity. For lawmakers like Brooks, it would also include the Constitution’s Speech or Debate clause, which generally provides significant protection against legal responsibility for things lawmakers do in the course of their business.

While suits over injuries and property damage due to negligence of a government worker or official often continue, those claiming injury or damages from an intentional act are typically dismissed outright after the U.S government steps in.

Not a love story: Biden has long been wary of Russia’s Putin